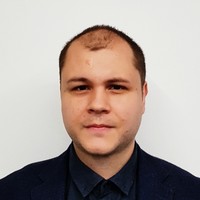 This article explains a straightforward approach for generating Perfect Hash Functions, and using them in tandem with a Map<K,V> implementation called ReadOnlyMap<K,V>. It assumes the reader is already familiar with the concepts like hash functions and hash tables. If you want to refresh your knowledge on the two mentioned topics, I recommend you to read some of my previous articles: Implementing Hash Tables in C and A tale of Java Hash Tables. 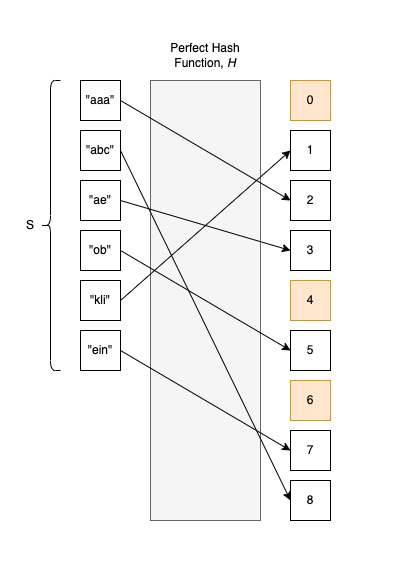 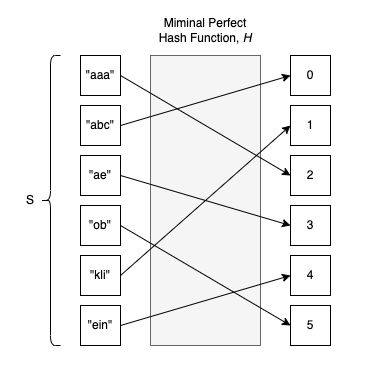 A function like this would be fantastic to use in the context of Hash Tables, wouldn’t it be so !?

In theory, without collisions, every element goes straight into an empty bucket without risking finding an intruder already settled. Or, in the case of Open Addressing Hash Tables, the element doesn’t have to probe the buckets to find its place in the Universe.

Another (significant) advantage of using an MPHF is the space consideration: we can don’t have to impose a load factor on the Hash Table, because we know there’s a perfect association (1:1) between elements and buckets. When using an MPHF, the load factor is 1.0, compared to ~ 0.66-0.8 for Open Addressing Hash Tables or 0.7 for classic Separate Chaining implementations.

But don’t get too excited; there are a few gotchas:

The idea for generating PHFs and MPHFs is not new; it first appeared in 1984 in a paper called Storing a Sparse Table with O(1) Worst Case Access Time. A significant improvement was proposed in 2009 with the paper Hash, displace, and compress (which the current article is based upon).

Meanwhile, more algorithms have emerged, and most of them are already implemented and described in the cmph library. What is nice about cmph is that you can compile the lib as a standalone executable that allows you to generate MPHFs from the command line. Currently cmph supports the following algorithms: CHD, BDZ, BMZ, BRZ, CHM, FCH, CHM, and FCH, each with its own PROs and CONs, as explained on this page.

If you are passionate about this topic, you can also check Reini Urban’s Perfect-Hash for PHFs code generation, and his article on the topic.

In this article, we are going to implement in Java, a “naive” version of CHD, which is actually based on how Steve Hanov implemented it in python, in his article: “Throw away the keys: Easy, Minimal Perfect Hashing”, and this C implementation by William Ahern.

If you want to checkout the code associated with this project:

To get a better understanding of what we are going to achieve by the end of this article, let’s suppose we have a Set \(S\) of 15 Roman Emperors keys:

If we use Java’s built-in String.hashCode() on the keys, we will get a few collisions:

As you can see, the distribution is far from perfect; there are nine collisions in 15 buckets.

In this article, we will implement a class, PHF.java that will be able to evenly distribute the 15 Roman emperors into their own personal buckets. This would be the right thing to do because it would’ve been unfair to have "Trajan" sharing the same space with "Nero".

As you can see, there are no collisions now. Our function PHF.hash() works “flawlessly” in this regard: each Emperor to its own bucket.

Don’t get too excited. Let’s “microbenchmark” how fast our new function is compared to the established Object.hashCode().

Being ten times slower than Object.hashCode() is not what I intended to show you, but you get the main idea, PHF.hash() will be slower. My implementation is not exactly the best, but even if you apply some heavy optimizations, you won’t be able to get significant improvements.

The algorithm in images 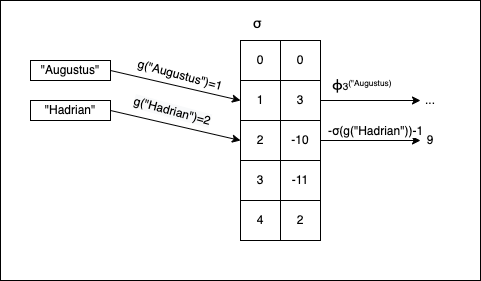 Don’t worry if things don’t make a lot of sense now; the code is easier to implement than the actual presentation.

In practice we don’t need two separate functions for \(g(x)\) and \(\phi_l(x)\), we simply apply the following convention:

From a code perspective, my function of choice was MurmurHash, using this Apache implementation:

We start with the following constructor and class attributes:

The next step is to define two hash functions:

At this point, we introduce a class called: PHFBucket. The sole purpose of this class, is to store the original index of the bucket after step 2.:

The last step is to define the actual algorithm. At the end, this.seeds[] will contain all the values necesarry to compute the MPHF (or PHF).

Now that we have PHF.java, we can create a Hash Table calledReadOnlyMap<K,V>, that only allows read operations:

We’ve already benchmarked how “fast” is PHF.hash() in the beggining in the article, and we’ve seen things can be up to 10 times slower than Object.hashCode(). But let’s see how fast is ReadOnlyMap<K,V> vs HashMap<K,V>.

In this regard I’ve written the following benchmark, the tests the performance of the get operation on a Maps of 20_000_000 keys:

The results were quite interesting:

The initial benchmark performed was incorrect, so I’ve reported erroneous results: the reality is that HashMap<K,V> faster.

On implementing Bloom Filters in C

A concise implementation of bloom filters in C